Книга The Family of Man. The photographic exhibition by Edward Steichen. 1955 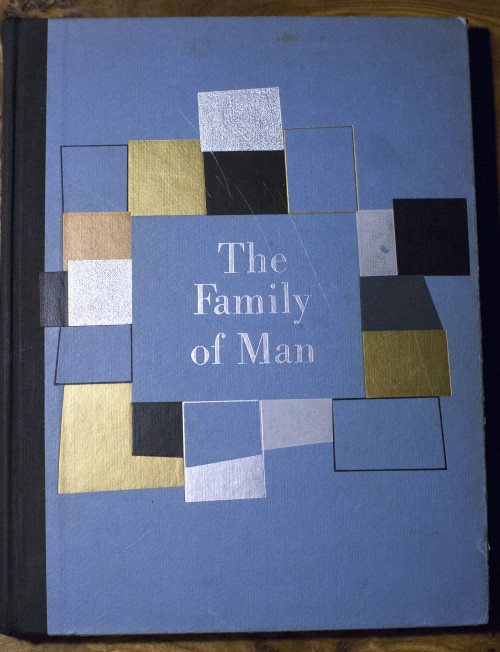 in collaboration with the MACO MAGAZINE CORPORATION

The first cry of a newborn baby in Chicago or Zamboango, in Amsterdam or Rangoon, has the same pitch and key, each saying, “I am! I have come through! | I belong! I am a member of the Family.”

Many the babies and grownups here from photographs made in sixty-eight nations round our planet Earth. You travel and see what the camera saw. The wonder of human mind, heart, wit and instinct, is here. You might catch yourself saying, “I’m not a stranger here.”

People! flung wide and far, born into toil, struggle, blood and dreams, among lovers, eaters, drinkers, workers, loafers, fighters, players, gamblers. I Here are ironworkers, bridgemen, musicians, sandhogs, miners, builders of huts and skyscrapers, jungle hunters, landlords and the landless, the loved and the unloved, the lonely and abandoned, the brutal and the compassionate—one big family hugging close to the ball of Earth for its life and being.

Here or there you may witness a startling harmony where you say, “This will be haunting me a long time with a loveliness I hope to understand better.” .

In a seething of saints and sinners, winners or losers, in a womb of superstition, faith, genius, crime, sacrifice, here is the People, the one and only source of armies, navies, work-gangs, the living flowing breath of the history of nations, ever lighted by the reality or illusion of hope. Hope is a sustaining human gift.

Everywhere is love and love-making, weddings and babies from generation to generation keeping the Family of Man alive and continuing. Everywhere the sun, moon and stars, the climates and weathers, have meanings for people. Though meanings vary, we are alike in all countries and tribes in trying- to read what sky. land and sea say to us. Alike and ever alike we are on all continents in the need of love, food, clothing, work, speech, worship, sleep, games, dancing, fun. From tropics to arctics humanity lives with these needs so alike, so inexorably alike.

Hands here, hands gnarled as thorntree roots and others soft as faded rose leaves. Hands reaching, praying and groping, hands holding tools, torches, brooms, fishnets, hands doubled in fists of flaring anger, hands moving in caress of beloved faces. The hands and feet of children playing ring-around-а-rosy—countries and languages different but the little ones alike in playing the same game.

Here are set forth babies arriving, suckling, growing into youths restless and questioning. Then as grownups they seek and hope. They mate, toil, fish, quarrel, sing, fight, pray, on all parallels and meridians having likeness. The earliest man, ages ago. had tools, weapons, cattle, as seen in his cave drawings. And like him the latest man of our day has his tools, weapons, cattle. The earliest man struggled through inexpressibly dark chaos of hunger, fear, violence, sex. A long journey it has been from that early Family of Man to the one of today which has become a still more prodigious spectacle.

If the human face is “the masterpiece of God” it is here then in a thousand fateful registrations. Often the faces speak what words can never say. Some tell of eternity and others only the latest tattlings. Child faces of blossom smiles or mouths of hunger are followed by homely faces of majesty carved and worn hy love, prayer and hope, along with others light and carefree as thistledown in a late summer wind. Faces having land and sea on them, faces honest as the morning sun flooding a clean kitchen with light, faces crooked and lost and wondering where to go this afternoon or tomorrow7 morning. Faces in crowds.

aughing and windblown leaf faces, profiles in an instant of agony, mouths in a dumbshow mockery lacking speech, faces of music in gay song or a twist of pain, a hate ready to kill, or calm and ready-for-death faces. Some of them are worth a long look now and deep contemplation later. Faces betokening a serene blue sky or faces dark with storm winds and lashing night rain. And faces beyond forgetting, written over with faiths in men and dreams of man surpassing himself. An alphabet here and a multiplication table of living breathing human faces.

In the times to come as the past there will be generations taking hold as though loneliness and the genius of struggle has always dwelt in the hearts of pioneers. To the question, “What will the story be of the Family of Man across the near or far future?” some would reply, “For the answers read if you can the strange and baffling eyes of youth.”

A camera testament, a drama of the grand canyon of humanity, an epic woven of fun, mystery and holiness—here is the Family of Man!